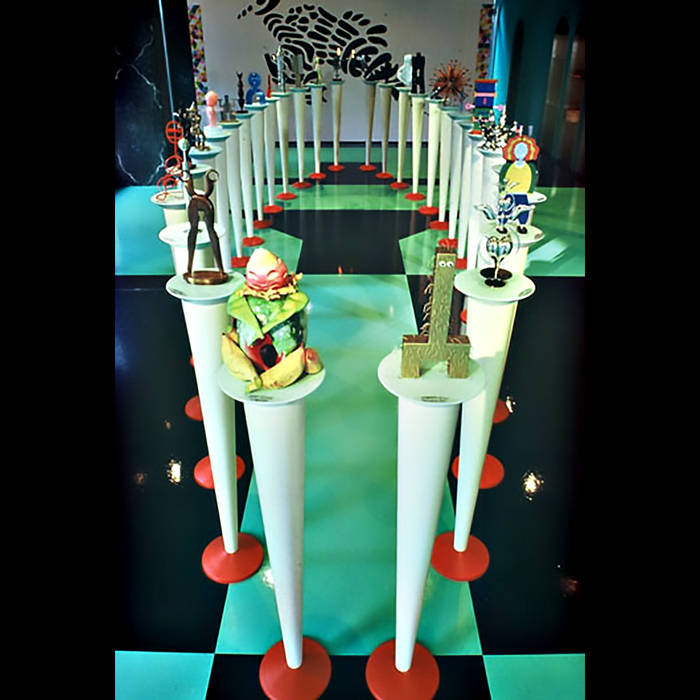 The artist Groc had introduced me to the work of Milan based anti-design group Memphis in the 1980s and my work was increasingly in empathy with anti-design, or rather, anti-modernist principles.
I was making use of ornament, decoration, sonic non sequiturs, and non-functional gestures in my work. My work, rather like the work of Studio Alchimia, was in one particular sense anti-modernist. The design world of the 20th Century was dominated by the Bauhaus principle that 'Form Follows Function' but by the late 1960s some designers flipped this principle and challenged it.
Studio Alchimia was an important part of the anti-design movement, although it also became its last shout, certainly in that particular wave of anti-design.
Alchimia had published a set of Rules of Design in the 1980s and I was able to adopt some of the Rules that were transferable to music and sonic art. Another document, Telegrams to the Designer, was also important to my projects at the time.

In 1987, I moved from Fonthill Road to Gloucester Terrace with my partner, the author Kim Carlson. This left the room in Fonhill Road available for me to use as a studio. I moved in a Knight upright piano, an Atari ST, a Yamaha DX7 and a Roland DR-550 drum machine.
I adopted a routine: I took the Central Line from Lancaster Gate to Oxford Circus, had coffee at Ponti's in John Prince's Street (which is now a restaurant, but then, very definitely a café; a self-service café in fact), then took the tube from Oxford Circus to Finsbury Park. I would plan my day over coffee at Ponti's, read letters from Groc and write my responses to them. These letters were important to us at the time. Together we developed theories of a new artificial art which we tagged onto the big toe of the by-then-deceased ideas of Post Modernism. Part of our practice involved pretence and this idea became important in the composition of my Spiritelli project.

I had discovered Studio Alchimia via an article in Vogue. The London distributor for Alchimia's work was Ikon Corporation. I contacted them and went over to visit their showroom in Wapping. They had, at the time, a broad range of work by designers from across the world. Shortly after this they moved to new premises near the Design Museum at the end of Shad Thames, South of Tower Bridge, after which they began to commission collections from individual designers.
They were able to put me in touch with Alchimia in Milan, I had finished the first project in my new anti-modernist style and I named it Spiritelli after Alchimia's current project.
The following two years, I wrote music for Ikon Corporation, commissioned for specific collections.

A number of Alchimia projects had involved research into people's homes and the everyday objects that were familiar to people across cultures and countries. It was observed that within many homes across the world there were religious or spiritual figurative icons, fetishes or gods associated with many different cultures and religions. Spiritelli, or Little Spirits for the present time were then commissioned from 30 contemporary designers. The Spiritelli were placed on plinths and exhibited in the Alchimia showroom in Milano as seen on the album cover.
Credit: Spiritelli. Alchimia. Milano

The music of Spiritelli makes use of very rapid changes of patch (timbre) on the Yamaha DX7, driven via MIDI from the Atari ST. I had studied the technology needed for the project at Morley College which was a focal point for exchanges of knowledge in the field of MIDI technology at the time. Editing of MIDI was done on a text screen, rather than graphically, so a knowledge of the workings of MIDI were indispensable at the time.
MIDI was a relatively new technology, certainly new to most musicians. The Atari ST was the most used computer for music, partly because it shipped with built-in MIDI ports (IN/OUT). Although at the time most people used Cubase, I preferred Dr T's Keyboard Controlled Sequencer (KCS) which, when expanded, included the unmatched Programmable Variations Generator (PVG).

The score of Spiritelli is available from SOUNDkiosk jim.soundkiosk@gmail.com on request. It is a 'record' of the music, rather than a performance score.