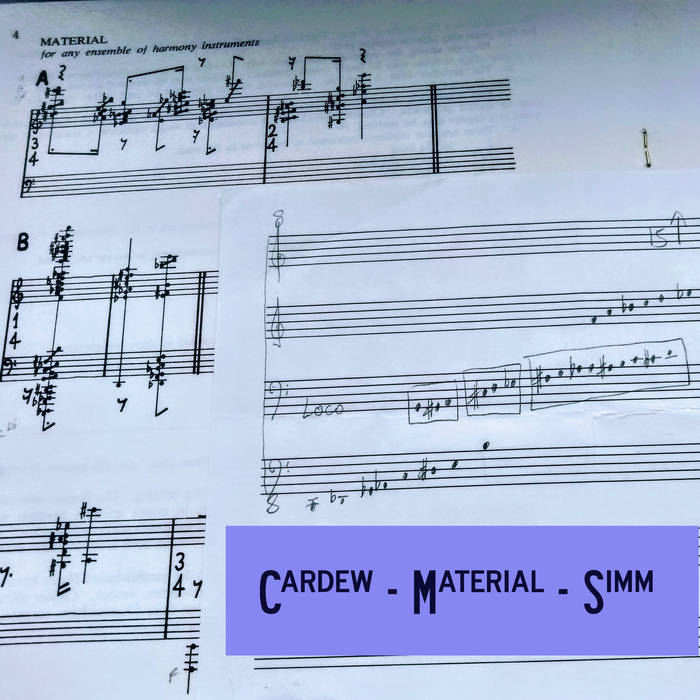 Material for any ensemble of harmony instruments by Cornelius Cardew

The first time I heard a performance of Material was at John Tilbury's 60th Birthday Concert. I had never seen the score and at the first opportunity I bought a copy. In some ways, the score seemed familiar. It seemed to be an example of a 'mobile' score, one consisting of a number of sections which the performer/s may move between freely, in any order. While this is true to some extent of the score of Material, having 17 short sections the order of which may vary, the extra performance directions, essential to the performance (not just a vague guide to the piece), reshape the score, and the way the player reads the score, completely. As it happens, Cardew refers to the performance directions, with a chunk of irony, as 'rules of conduct'.

One feature of much post-WW2 European (and to some extent American) avant garde music was the inclusion of detailed prefaces including copious performance directions controlling the performance of a composition, sometimes to an extreme degree. Compositions that come to mind include Zyklus (1959) and Plus-Minus (1963) by Karlheinz Stockhausen, although the practice was widespread.

I mention Stockhausen because Cornelius Cardew had worked with him between 1958 and 1960, and it is clear that Cardew's works of the following half decade or so were in a sense a response to, a challenge to, and a breaking-away from Stockhausen. Material is one of a number of compositions of the period that stood partly as a critique of Stockhausen's 'quasi-legal' approach to performance. The performance directions in a Stockhausen score would seem to be made of clauses and sub-clauses resembling laws rather than directions or instructions, hence, we can at least suggest, Cardew's use of the phrase 'rules of conduct'.

Virginia Anderson writes: “Cardew's last tie to the European avant garde occurred while studying with Petrassi in Rome in 1964, where he tried experimental free improvisation. Years later, he acknowledged, “I stopped writing like Stockhausen around 1964.”
… “he satirised Stockhausen's Plus-Minus (1963) in his own Solo with Accompaniment (1964) and attempted to leave what he called “Stockhausen country” in performances of Plus-Minus with Frederic Rzewski.” (1)
So it seems the date of Material, 1964, places it right at that turning point in Cardew's career.

The Anderson paper, ‘1968’ and the experimental revolution in Britain, is required reading around this subject. Access details below.

Cardew's rules of conduct are so different from those of Stockhausen and others to the point of almost reversing their intention and their effect. Although thorough and complete, the rules lead to a freedom for the performer, not a pinning-down.
First of all, we can progress through the 17 sections in any way and a section may be repeated several times. If the performance involves more than one person, they begin together at first. (This reminds me of Rzewski's Les Moutons de Panurge (1969) in which, if a performer gets lost, they are to stay lost, although in Material, the choice to 'counterpoint' one section freely with another, is a matter of choice rather than incident).

By the way, I get a sprinkling of amusement that the publisher of Material, Universal Edition, Vienna, was known at that time for their focus on and the promotion of the European post war avant garde, and that the rules of conduct are reproduced in both English and German. I'm aware that I'm creating my own irony from this, imagining that the German version is included with a certain K. Stockhausen in mind.

The score, along with the performance directions, takes a very specific approach to rhythm.
If we consider for a moment that in traditional musical rhythm the beat dominates, we might conclude that the notation of Material renders the beat ambiguous and gives an equal significance to subdivisions of the beat. More than that, the idea of a beat itself is actively challenged, and the notation, as well as the rules, renders not only the beat, but rhythm itself, ambiguous.
As I worked on playing Material, it seemed very clear that it is in its treatment of rhythm that makes the piece unique. The rules concerning rhythm are very specific, but following the rules carefully has the effect of freeing up a performance rather than pinning it down. A crotchet beat is 'variable', excessive rubato may be used within a beat. Notes and chords (following the rules, we play only a selection of the written notes) may be played at one of four places within the beat, as notated in the score, but even these are flexible, or at least open to performance choices way beyond an idea of 'interpretation'. The positions within the beat are: On the beat, just after the beat, between beats and just before the beat. It is only at the beginning of a performance that players synchronise the beat.
From the first time I played through the score, it felt to me that the four places within the beat would have characteristics in relation to the beat. A down beat (on), a reaction to a beat (just after), neutral or settled (between beats), and anticipatory, or upbeat (before the beat). I stayed with that throughout rehearsal and recording. This may be detectable in my performance.

I made a number of recordings of Material in 1998 using a vibraphone patch on my Yamaha P-150 piano. The one on the current EP is one in which I played the sections through in order, as they appear in the score.