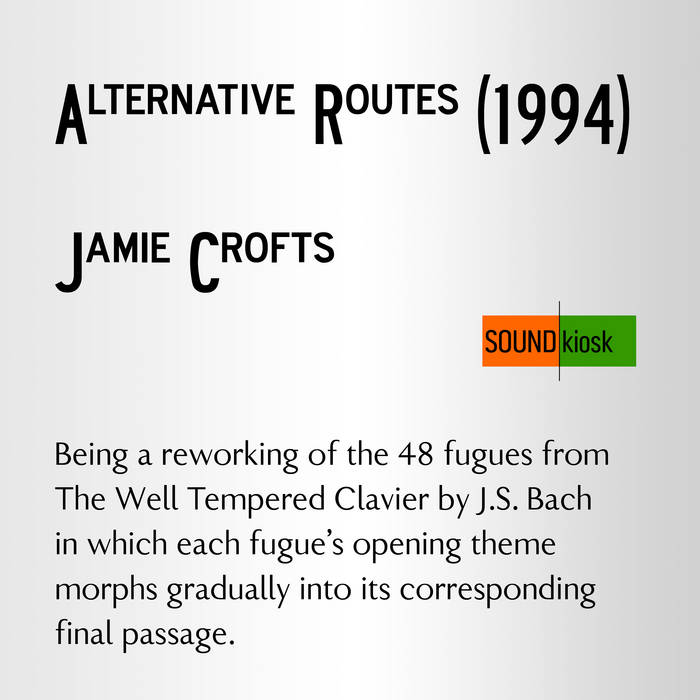 Alternative Routes are based on the 48 Fugues, from the 48 Preludes and Fugues, known as the Well Tempered Clavier, by J.S. Bach, usually published in two volumes. Each Alternative Route begins and ends with the same material as the beginnings and endings of Bach's original compositions but takes an alternative route from opening to ending. This route is one of gradual change or mutation in which the opening theme morphs into the corresponding final passage, leading in to the cadence. The resulting music was finely edited to eliminate MIDI glitches and same-pitch clashes.

The Alternative Routes were composed in 1994 using an Atari ST computer running Dr T's Keyboard Controlled Sequencer, software created by Emile Tobenfeld in the 1980s. KCS offered the user an unprecedented range of tools for the creative manipulation of MIDI data. The 1980s not only gave us affordable computers including Amstrad, Amiga and Atari ST, but software which explored a broad range of possibilities. At the time of writing the Alternative Routes, I had been writing music using the Atari ST for 6 or 7 years, having studied computer music and MIDI at Morley College in London in the late 1980s. I had also moved from London to Hove in 1993 and had embarked on an extended period of experiment, including a series of 'Games', mostly for piano.